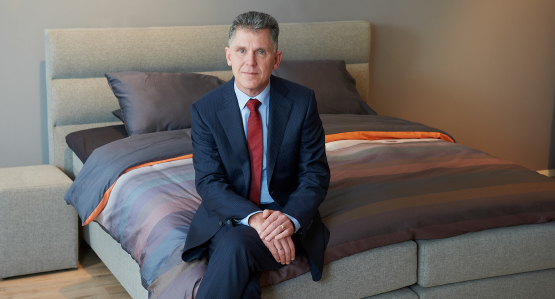 Beter Bed Holding succeeded in continuing the positive trend of 2014 in 2015. There was strong growth in revenue, margins and operating profit.

Investments in the Beter Bed formula (marketing, e-commerce and stores) in the Benelux paid off with like-for-like growth of 11.6% in 2015. The company also reaped rewards from the new visual identity and advertising campaign at formulas including Matratzen Concord. Revenue rose in all countries in the first six months of 2015 due to a pick-up in demand stemming from increasing consumer confidence and a greater propensity to buy. In the Netherlands, both the recovering housing market and low interest rates contributed to this development. Like-for-like growth in revenue in the German-speaking countries came under some pressure due to the challenging comparative basis. Revenue nonetheless remained at a high level.

The company ultimately succeeded in achieving 5.9% growth in revenue and a 5.4% increase in the like-for-like order intake in 2015.

It was possible to combine growth in revenue with the realisation of higher margins. In addition to the improvement in the purchasing conditions, this is attributable to an improved range, better mix and product innovations, as well as price increases wherever possible. The structural approach to improving margins in combination with reducing working capital will be continued unabated.

The development of expenses remained under control and any increases in expenses were aimed at further strengthening our commercial propositions in the various markets. Customer satisfaction and e-commerce remained our key focus in this respect.

Matratzen Concord Germany succeeded in substantially improving its revenue, particularly in the first six months of the year. This improvement was supported by the new advertising campaigns and boosted by the increased propensity to buy that was already evident in 2014. Like-for-like came under some pressure in the second half of the year, primarily owing to the challenging comparative basis from 2014. A similar picture emerged in Austria. The acquisition of BettenMax caused the number of stores in Austria to grow by 18 stores located in retail parks. Switzerland felt the consequences of the unexpected change in the Swiss franc exchange rate, which negatively impacted the propensity to buy and consequently also revenue. The tide was turned in late 2015 as a result of new management and adjustments to the formulas.

Beter Bed Benelux had an excellent year in 2015. The combination of a thoroughly renewed range within a contemporary store environment backed by outstanding service, recovered consumer confidence and a recovering housing market led to a substantial increase in revenue. Customer satisfaction increased considerably, which is reflected in a higher Net Promotor Score. Renewal characterised the year under review for Beddenreus as well. The look and feel of the stores, advertising and range all underwent a far-reaching transformation. The positive results of this became clear in the second half of the year.

In Spain, El Gigante del Colchón achieved higher revenue due in part to cautious expansion. The pilots with two stores in France, where the company operates under the name 'Literie Concorde', were successful. A decision regarding a potential further roll-out of this new formula will be made in the second quarter of 2016.

The outlook for 2016 is positive. The economic outlook and the development of the housing market (at low mortgage interest rates) continue to appear to be favourable, despite a number of uncertainties. Building on the results of the measures put in place in the past few years, steps will be taken to continue like-for-like growth and to ensure that the formulas remain contemporary. To achieve this, a new strategic plan was formulated in 2015 for the period 2016-2020, named 'From good to great'. The primary focus in that plan will be on innovation and maximum customer satisfaction in an omnichannel environment. Expansion will also be a priority, in order to further strengthen the position of our formulas in the various countries.

We are pleased with the results achieved in 2015. We are not only happy with the realised revenue and operating profits, but also expressly with the accomplishments achieved by our colleagues through their tremendous dedication and passion in various fields. The logistics and back office departments within all the formulas have put a huge amount of work into ensuring our customers receive the best possible service.

We realise that our success would be inconceivable without the outstanding commitment of our colleagues. We would like to once again thank them sincerely and wholeheartedly for this.

Report of the Management Board